One option is a used, 20 year old HP 8753E series. I had one of these. They work fine, but they are enormous, and you need to use a floppy disk or a GPIB to get data off it – not such a blast from the past.

I replaced it with what appears to be a Chinese knock-off of a Rhode-Shwarz portable VNA. Was $1700, IIRC, now is $1999. Perhaps tariffs, I suppose. Although there is a 4GHz version now that’s a bit cheaper.
(http://www.deepace.net/store/)

I was prompted to take a chance on it after Shariar did a review.
http://thesignalpath.com/blogs/2017/05/14/deepace-kc901v-6-8ghz-handheld-network-analyzer-review-teardown-experiments/

I compared it to my 8753 (before I offloaded the 8753), and the performance was favorable. Hooray for 20 years of amortization of digital VLSI! It’s very small, which is also awesome. I like it quite a lot.

Thanks for sharing, after this weeks Amp hour I was curious about people’s experience with miniVNA Tiny.

Regarding the VNA that you mentioned, can it do spectrum analysis, how about power sweeps to get amplifier compression and TOI? Those were convenient measurements I liked to do on the R&S ZVB that I had at a previous employer.

I don’t think that R&S ZVL3 is too far away from $3k, that would do similar functions bu only up to 3GHz. (I don’t have much reason to go past 3GHz)

It does these features. I don’t generally need above 3GHz, but it’s nice to know that I can cover 5.8 GHz if necessary.

For an even smaller budget, there’s the N1201SA vector impedance analyzer. 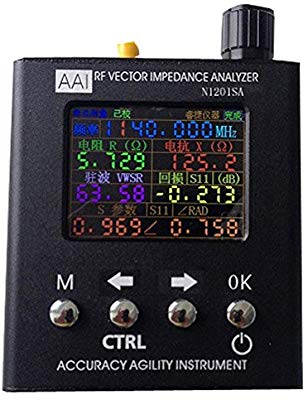 I picked up one of these just to play around with some 2.4GHz chip antennas. It doesn’t have all the bells and whistles, but let me tune a chip antenna for 2.4GHz. If I were doing serious work, I’d consider something better, though it is reported to be pretty accurate for what it does. It measures s11, vsrw, impedance, and a handful of others, but lacks smith charts.

Having no prior experience or skills in the RF domain, I found this video very helpful, and sold me on that model:

I also found this a handy resource: http://colinkarpfinger.com/blog/2010/the-dropouts-guide-to-antenna-design/

Are there other/better references, perhaps taking it a level deeper? Favorite books on the subject? I don’t intend to design my own antennas, but knowing a bit more theory would be handy!

Thanks for sharing, after this weeks Amp hour I was curious about people’s experience with miniVNA Tiny.

Have not listened to this THA episode yet, but got miniVNA Tiny in 2014 and works quite well for most simple antenna applications. Need to be careful with calibration drift and temperature compensation. Right now using R&S entry level FPC1500 SA with 1-port VNA option for quick antenna measurements (over LAN, up to 3 GHz). Quite happy about it. Has much lower noise floor, faster speed and smaller drift.

miniVNA Tiny performance improved a bit after reworking the circuit a bit (decoupling, filtering, shielding). Wish I could redo most of its PCB layout to perform better. Exactly the same story with DG8SAQ VNWA3 – there is room for improvement. Also have not used them as SA, only as VNA.

@jpnorair does this analyzer have the capability of saving S-Parameters to a file? How about a serial or USB interface with scripting tools?

It has an SD card slot for saving files. I don’t think it’s scriptable.

I’m considering the Deepace as well. What would the scripting be needed for? Seems like a lot of measurements are pretty hands on.

I was just thinking of scripting as a method to automate and control the various scan settings for a particular measurement. Say for example that you wanted to have a test protocol to collect exactly the same measurement over a number of units spread out over a few months of development.

Often in final assembly, some VNA measuring is done on an RF frontend or antenna for the purpose of fine tuning (ie changing a cap value) or merely acceptance. Often this is scripted. I’ve never used a script on any analog test equipment during lab use, though. Granted, I don’t do that much test. I prefer simulation until the last mile.

Edit: So one thing led to another and the buy it now button got clicked… Very impulsive of me…

Oo, will be very interested to hear your take on things.

I had the opportunity to hang out with @mightyohm the past week, he was giving me a bunch of good specs to look at past just the dynamic range and the ability to do different measurements. Was there a spec sheet on that page I missed? Or a manual?

I mostly purchased it blindly based on its capability/price. It seemed low risk to me because I’m pretty confident that it can be re-sold maybe even for a profit.

And a Spec Sheet:

The fact that it comes with a Cal kit is a nice bonus (even if it is N-Type). The GPS input is interesting because this likely means that it has a GPS Disciplined reference clock.

Lastly although I may not use it or it might not support the lowly modulations methods that I would test with it, it is pretty darn cool that it has EVM capability, that is usually a high end add on for a High speed scope/ Spectrum analyzer.

For me it just seemed like a deal to get all of these features baked into a portable device.

Edit: So one thing led to another and the buy it now button got clicked… Very impulsive of me…

Here is the Datasheet for this specific model: https://rfimagingandcommunications.com/wp-content/uploads/2018/10/JD747A_datashell.pdf

I did receive this on Friday. Have not spent a lot of time with it nor do I really have a specific project in dire need of it. With that said I did hook up an antenna and do some obligatory Spectrum analysis and VSWR plots. So far it seems quite useful. It does not appear to be Windows based so that is nice in my opinion. The menus and buttons are pretty intuitive as well.

It does have a USB Device and LAN connection, apparently to interact with this software: https://www.viavisolutions.com/en-us/software-download/jdviewer-application-sw-pc . It would be really good to determine if there is a way to have a python library for it.

This means that it cannot do the full 4 port measurements automatically but I would rarely ever want to do that and can just reverse the DUT if all those measurements are needed.

In general, so far I’m happy but lots more to uncover. Will keep posting as I explore more!

Thanks for sharing. Deepace is looking a good store with unique collection but is it also provide reflow ovens? Actually, I didn’t see any here.

I am looking for a VNA to mainly tune PCB antennas or impedance matching PI filters. The cheap option would be a nanoVNA V2 + UFL calibration kit.
As the price gap between this cheap VNAs and more professional one is very huge I was asking myself which drawbacks do they have and if they effect in any way (or not) my specific antenna tuning goal…

So I guess for antenna tuning, it may not be the best choice

Siglent makes some cheap-ish VNAs that look quite nice. The series of interest, here, is the SVA1000X. Apparently, the frequency limits are set in FW and can be hacked, but I haven’t tried that, and I won’t personally recommend it.