What are you reading? March 2020 Edition

Well Covid-19 has us all locked inside, right? Lots of opportunities to pick up new things to read! What have you been reading?

I usually split what I’m reading into business, technical and fun books, but you are welcome to post however you’d like!

Technical, I am reading some manuals on a new 20 ghz tdr we just bought. All in a foreign, (EE speak), language to me.
Fun, I am just finishing up the last book of the C. S. Lewis Space Trilogy. Out of the Silent planet #1, #2 Peralandra and #3 That Hideous Strength.

Lockdown reading has been interesting, because I don’t walk nearly as much as I used to. Plus my partner is usually out walking the dog with me, instead of by myself when we both had to get to work, so less time with headphones then as well. As such, much lower reading output.

A Tale of Two Cities

I really love Dickens (and Melville, and Elliot…

Any recommendations on what I should try next?

It’s hard to beat Moby Dick; I never tire of re-reading it.
For Dickens, Martin Chuzzlewit is a personal favorite, Our Mutual Friend and Bleak House are also great.
Anything by George Eliot, particularly The Mill on the Floss and Daniel Deronda.
My favorite book is Neal Stephenson’s Baroque Trilogy, a rip-roaring historical fiction set during the time of the scientific revolution featuring towering figures like Hooke, Leibniz, Huygens, Newton, Boyle, Wren, Peyps, etc.

I hadn’t heard about these, though I love Seveneves, Diamond Age, Cryptonomicon and Snow Crash (probably in that order). I’ll definitely check out the Baroque stuff, thanks for the recommendations for all of those authors!

I love almost all of Stephenson’s stuff too. As you’ve read Cryptonomicon, you’re familiar with the Shaftoe family - one of the main protagonists (if not the protagonist) of the Baroque Trilogy is “Half-Cocked” Jack Shaftoe, a flamboyant swashbuckling rogue, the family progenitor.

Love Stephenson. Cryptonomicon and Snow Crash are both all time favorites.

Oh yeah, I’m pleased that you mentioned The Diamond Age. I really like that, and no-one else seems to even have heard of it! The Baroque trilogy is lots of fun too. I really liked all the “industrial alchemy”/mining/metal refining subplots…

For historical fiction, I don’t think you can beat Patrick O’Brian’s Aubrey/Maturin novels. Start with Master and Commander, and just live the Napoleonic Wars at sea for a few months. I inhaled the whole series (21 books, I think) in one spring after I’d broken a collarbone badly enough to do little but sit in a chair reading. They are absolutely marvellous, and have this slow burn to them that only becomes possible with this sort of super-long form serial fiction. They’re also interesting because they have the feel of being books written for contemporaries of the characters in the books, not for a modern reader.

What else? The Girl With All The Gifts, M. R. Carey. Extreme mycology, like The Road with mushrooms… (The Road is only recommendable if you have a strong stomach and don’t normally suffer from nightmares.) Anything by T. Kingfisher (Ursula Vernon’s pen name for writing for grown-ups). Clockwork Boys, Nine Goblins, Swordheart, all quality.

Totally different, if you like spy stuff, are Mick Herron’s Slow Horses books. Possibly the best approach to the genre since Le Carré, I reckon. And for a different genre, Tana French’s Dublin Murder Squad books are too good for me to describe. They start with In the Woods. They’re amazing.

Ooh. Gushing about books is fun.

For more serious stuff, I’ve been reading Alan Cohen’s Prototype to Product, which O’Reilly are giving away free right now. Probably old hat to most people reading this, but I got some ideas from it.

What do you think of the C. S. Lewis books? I’ve been tempting by them several times, but always read the blurbs and think “Nah”. Are they any good?

After reading Stephenson’s Fall - Dodge in Hell, which I found disappointing, I went back and checked out his earliest works, Diamond Age and Snowcrash, and loved them both. His recent D.O.D.O. is also really fun.

The Aubrey/Maturing series is stupendous. A 20th-century writer who could write as well as the 19th-century crew. Love it to death.

What do you think of the C. S. Lewis books?

I read Out of the Silent Planet and Perelandra in high school and liked them, but couldn’t make it through the third in that series, whatever it was called. Not something I would be inclined to revisit.

Totally different, if you like spy stuff, are Mick Herron’s Slow Horses books. Possibly the best approach to the genre since Le Carré, I reckon. And for a different genre, Tana French’s Dublin Murder Squad books are too good for me to describe. They start with In the Woods . They’re amazing.

If you enjoy scifi, and horror, and spy novels - and it sounds like you do! - I would highly recommend Charles Stross’s The Laundry Files series. The first book is The Atrocity Archives.

Additionally - how did you get your hands on that free copy of Prototype to Product? Sounds interesting and imminently relevant to me personally.

You can get Prototype to Product here: https://www.oreilly.com/online-learning/navigate-change/nb.html

I hadn’t heard about these, though I love Seveneves, Diamond Age, Cryptonomicon and Snow Crash (probably in that order).

Ah, Seveneves was great, but oh my GOODNESS it was long! If y’all are looking for a great nonfiction book, take a look at The Perfectionists - Simon Winchester. It’s about the history of precision engineering with topics such as the original steam engine, hand crafted locks, the Ford motor company manufacturing model, the Rolls-Royce manufacturing model, the flaw in the Hubble space telescope mirror problem (and how NASA solved it), and much more. If you get the audiobook he does an excellent job of reading it himself.

I listened to Radicalized by Cory Doctorow; four different stories of technological distopia, but much more subtle and grounded in reality than the typical sci-fi (speculative fiction I have heard it called). I really enjoyed it, it melds very well with my own ideas around intellectual property, technological control and societal power structures. The first story, “Unauthorized Bread” starts with a woman’s toaster not working at all anymore, because the cloud went down, since the company that makes it just went bankrupt.

Moved on to Someone Comes to Town, Someone Leaves Town by the same author right after that (after hearing it mentioned in an interview on the Co-Recursive podcast). That one is way weirder and reads like Cory Doctrow’s unconscious unfolding in a dream-like story. The main character’s father is a mountain, his mother is a washing machine, his brother is an island, his other brother is a corpse and his other three brothers are Russian nesting dolls. Among other things, he meets a random tech nerd and helps him set up a wireless mesh network across Toronto. A lot of fun to read. (Makers is another good one by Doctorow that I read years ago)

Books I dip in and out of because they are both quite dry (but very different subject matters):

Another one I started is Driven to Distraction by Hallowell and Ratey which is about attention deficit disorder (ADD). I have a lot of the behavior/habits/symptoms and problems of people that are diagnosed with ADD so it’s nice reading about some cases and how other people cope.

It’s still a massive mind bender whether I should be doing anything more than this because it does seem like the symptoms are somewhat “astrological” i.e. a lot of people struggle with these issues (lack of motivation to do things you signed up to do but a “hyperfocus”, insane concentration ability on some things sometimes) and diagnosing it comes down to whether they are extreme in some way. The incentives for psychologists to become experts in a newly discovered syndrome and for pharma to sell drugs to solve it seem misaligned as well. At least it’s encouraged me to try and go out and get some exercise when I feel like I can’t concentrate.

I have also really been enjoying the comic art of Moebius and have started reading The Incal. Though I think I like his art more than this story in particular. It has some cool ideas and an elements but kind of seems to drag on deeper into some fantasy world for no particular reason. Let’s see what happens in the end, I haven’t finished it yet. I am thinking about getting the Starwatcher book in dead tree form since it’s an image from that, that set me down this path: 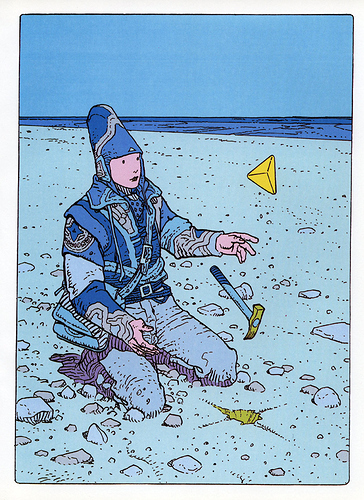