Here is my recent project, a sensor for measuring the sugar level in fermenting apple cider. My friend uses it to monitor his fermentation at his small cidery.

My project was inspired by the iSpindle and Tilt Hygrometer.

The iSpindle uses WiFi, the Tilt uses Bluetooth, which only barely work, if at all, in large steel tanks.

So I wanted to try the beefiest sensor radio that I could think of, Lora, and try something that could be prototyped easily. 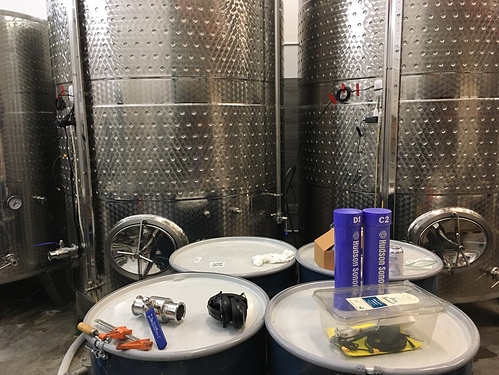 This is the inside of a purple sensor: a RadioBridge LoraWAN dev kit, stainless steel weight, and HDPE spacers to position the weight and sensor appropriately. I had to cut this sensor open to replace the battery. (I tried a screw-top pipe but it frequently leaked.) The LoraWAN module was misconfigured and was sending too man high spreading factor messages that take longer to send and use more battery life. 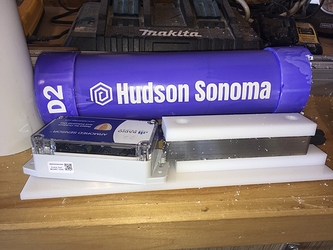 Here is the example web app that shows the current and recent readings using the The Things Network LoraWAN stack. (TTN)

With this Lora-powered design, the user only needs one gateway (TTN Indoor Gateway - $89) for the whole cidery, instead of multiple bluetooth receivers mounted close to each tank, as the other products require. (Or even an in-tank antennae)

Here is an example of the calibration curve from sensor angle to specific gravity. 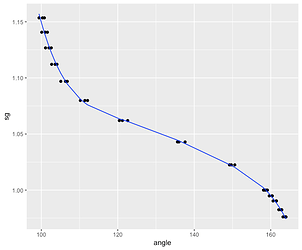 What I learned from this project:

After this test I’m not that keen to make this into.a product for sale. First, there are IP issues, as the Tilt seems to have a key patent. Also, relying on a cloud service like TTN seems like an unnecessary dependency on the global internet when you just want a sensor reading to get out of a tank of cider.

Nice project Tim,
I reckon the mechanical side can be as challenging or even more than the electronic side - here you had added challenge of making it food safe. Well done!

Interesting project, Maybe here an idea from a different background. I was involved in the sensing of fuel levels in the tanks of trucks. The purpose was to detect fuel theft. One approach we uses was pressure sensing. In this instance you want to measure gravity. In your instance If you place 2 hoses into such tank say 1meter difference in height, you will measure 2 different pressures. Basically the differential pressure of 1 meter of fluid. If that distance is constant at 1m and the gravity of the fluid changes, the pressure difference should change as well giving you a measure of gravity. The advantage of such method is that you can keep all electronics out of the tank. Just two food grade silicone hoses with the entry point at fixed but different heights.

This is a neat idea. What sort of pressure sensor do you use? How is the sensor protected from the fluid you are measuring?

If you use silicone hoses the sensor is mounted outside the tank away from the fluid. Make sure both hoses end up under fluid level and hook both onto a differential pressure sensor like an MPXV5004 from NXP . The differential is linear related to the weight of the fluid column in between the hose pressure. If that weight changes the specific gravity has changed as the distance between the hoses is a constant.