Hello Everyone,
My name’s Stephen, I joined CE so I can build on the basic skills I learned and left dormant in the early 90’s. I earned a vocational certificate in the 90’s, but ended up in IT. While I’ve played with various kits over the years and have a basic home lab, I haven’t created anything from scratch. I’m hoping to learn enough to build two personal projects, one a radiation detector, and the other a solar power remote sensing platform.

Welcome Stephen, you are in good company. My story is basically the same.

Welcome Stephen! Looking forward to seeing your projects and having you join in on the CE ones.

Thanks for the warm welcome. I’ve jumped right in and run through Getting to Blinky, submitted my
Gerbers to OSH and ordered the parts (with 1203 Caps :-). I learned a few lessons:

I really enjoyed the lesson and think I learned the basics of KiCAD. To reinforce the ideas, I’m going to build a version two, this time with two trimmer potentiometers to replace the two fixed voltage divider resistors. It should add some challenges to the layout with through hole parts while avoiding shorting the battery. However, based on the Build blinky video, I’ll wait until my parts and boards come in before submitting version two.

Good idea, I made the mistake of ordering Rev B before receiving Rev A and found an issue that I wished I could have fixed.

Today was an exciting day, as I completed ‘Getting to Blinky’. The OSH boards arrived yesterday, and the Digi-Key parts were waiting. The first thing that really sank in, was how incredibly small these parts are and how bad my eyesight has become in the 20 years since I last dealt with SMD parts. Eventually, I did get to blinky; after I learned/relearned a few lessons:

• Don’t Blindly Follow Video’s - The side of the LED with the cathode marker, is not the upside, might have been mentioned, but if so I missed it.
• Verify BOM Before Ordering – The 470 ohm resistors I ordered will not stand in for 470k resistors. Hence my Franken-sistor configuration.
• Tools Matter – Not having a quality set of curved tweezer was painful with these small parts. I also decided to upgrade to a Hakko from my 20’ish year old Radio Shack soldering iron. I ordered a few extra tips, for SMD parts and drag soldering (probably more dream than reality with my skills).
• Poor Near Vision – I hadn’t realized just how bad my vision was until this soldering attempt. I’ve ordered a USB microscope and I find myself very tempted by the dark side of toaster ovens.

Also just wanted to say how much I’ve enjoyed reading the forum, it’s been very instructive. 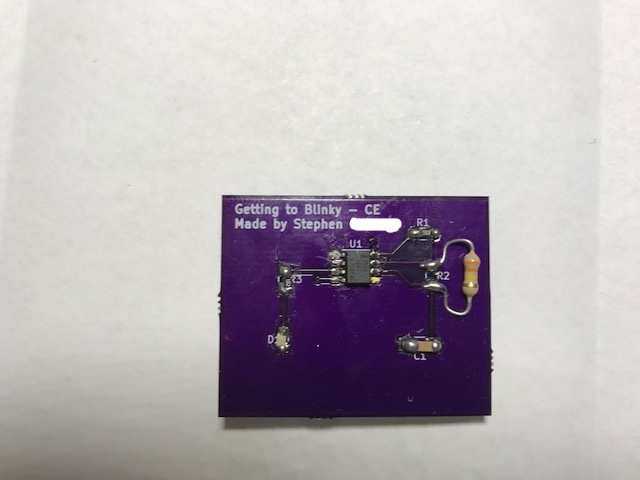 Awesome, congrats on the blinky!

Might be worth noting having components on hand like Mattias was asking about can be very helpful, especially if you standardize on a component size like 0805

Stocking up on SMD components - what and where to buy? General Electronics

Heya, I was planning to buy a few hundred of standard SMD resistors, capacitors, LEDs and more. Three questions: What size should I get? I'm used to old soldering and managed to hand solder an SMD board with 0805 caps but it was painful so I just ordered a Controleo2 reflow oven. I'm thinking of just getting 1206 sized components. What are the pros/cons with this apart from the obvious that one is smaller but harder to deal with? Where should I get it? I usually stock up on cheap comp…