After reading about people’s experience with the NeoDen machines, we’ve decided to purchase one (3V Advanced). So I am wondering where have people bought them from and what was your experience like?eBay? Alibaba? Direct? North American reseller?

I recently acquired a used Neoden TM240a, sight unseen off eBay from a seller that said he wasn’t sure if it was fully functional or not. I took a chance, offered less than asking price, and got it. The seller turned out to be an e-waste processor. The machine was apparently tossed out when a company/division closed.

It turned out that the machine is fine – it looked rough and had some cosmetic damage (it was definitely not pampered), missing a few non-critical items, including some spare nozzles (the largest ones used for doing TQFPs), and some pieces had to be nudged/adjusted. After some cleaning and figuring out the machine, I’ve so far managed a few successful test runs.

I need to clear off some space where it can reside more permanently, instead of on the plastic folding table in the garage. But even on the wobbly table, the TM240a was placing parts pretty nicely. It should be able to place 0603’s and SOT23 all day long without troubles – good enough for parts to snap into place during reflow. Even 0402s should be fine if I dial the speed down. But, QFNs and more fine pitched stuff will have significant placement errors since parts float around in the carrier tape prior to pickup. Using the discrete parts pickup tray for “reel 0” might at least allow for more precise placement since the starting position can be more precisely controlled. For “dead reckoning”, it does a very impressive placement job.

The 3V advanced, with its camera, should be great in comparison.

The two things I under-appreciated are: #1) without swappable feeders, it’s more of a pain to add/remove parts from the machine for different jobs, and #2) you need to correct for mismatch between your board design’s exported pick-and-place coordinate and (more importantly) rotation to the actual coordinate on the machine and part rotation based on actual tape feeding orientation.

In some sense, getting the used machine was a blessing – it came preloaded with a bunch of reels from before, so I didn’t feel particularly bad about burning through those parts getting myself familiar with its operation. My suggestion: buy a few cheap reels of 0603 resistors and maybe a reel of SOT-23 (something you’ll use) so that you can get a feel for how the machine operates. Use double-sided tape when making your first runs – the tape is needed to keep the part where it’s placed, as the nozzle will be blowing air to release the part. 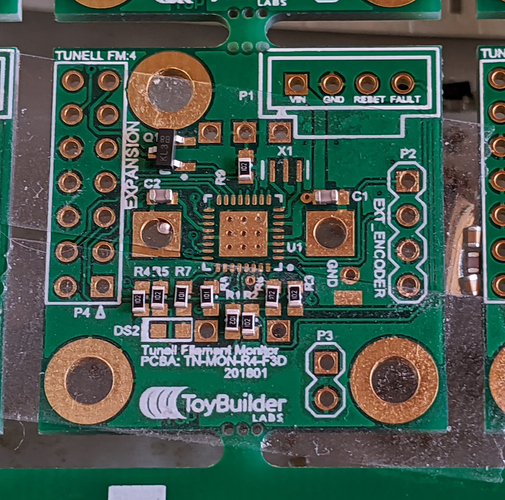 i bought both of my neodens, a tm220a and a n4 from neoden china directly. both purchases were very straightfoward (haimi at neoden) sent them a wire transfer, machine shipped directly to me at home.

the n4 arrived with one of the 4 nozzles not working, and it turned out to be a slight crack in the plastic connection on the pcb (maybe bumped in shipping), they sent me a new pcb straightaway and i also repaired the old one.

toybuilder is on point though, i definitely miss having easily swap-able reels, i’ve been looking at building an adapter for the n4

haven’t had any running issues, i made a few modifications to the neoden pnp software to my liking, and added a ethernet connection so i didn’t need to use a monitor or keyboard on the n4 and updated the eagle ulps for outputting directly to the neodens software.

i had looked at the newer models neoden have but they’re firmly now in the size/price range where i can buy a really nice (or two) used pnp from ebay, i still like the n4 for its small space constraints but i’d likely be looking at a used samsung or such as the next one, but i can afford the time to tinker.

For the DIY crowd, I have been looking at OpenPnP:

Maybe a little daunting to do. I do however have a CNC 6040, that could be fittet with a head, for a head start (maybe I will be doing this when I retire :-))