I’m currently haemorrhaging sanity units trying to get the display of a Rigol DS1054Z scope onto a Windows 10 PC. Rigol’s own UltraSigma/UltraScope works fine on my personal laptop but not on a work machine (that I have full admin account for), despite spending many hours troubleshooting (with Rigol support - they engaged well but are not yet successful). Rather than troubleshooting that further here, I was wondering if anyone has a good recommendation for alternative scope control and output waveform viewing software.

I would prefer USB because the scope doesn’t have an easy cable route back to the router but I will consider it as a last resort. I’d also prefer

Extra Credit
Installing some form of Linux specifically to run a `scope GUI seems a high likelihood at this stage. If this use case was the only one, would you pick:

All options willingly considered. Thanks!

If you have a prefect solution but it’s Ethernet only, you could just run a LAN cable to your computer directly. Use a USB/LAN adaptor, for example.

Just going to put a screenshot of the VisaDSO UI with real traces on. It’s nice because you can pull the full memory, rather than be limited to the resolution of the 'scope’s display. If only you could zoom in. 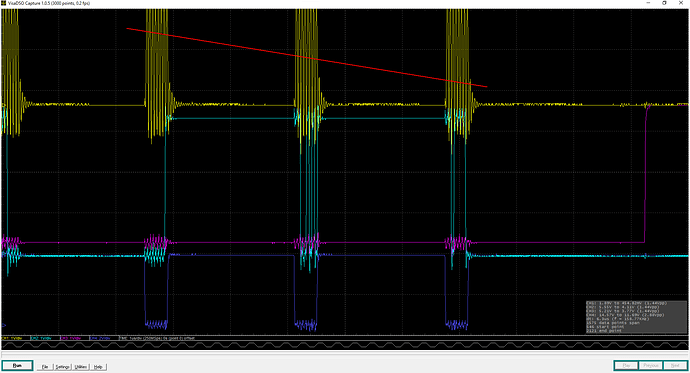 I use the python-vxi11 library for controlling my equipment. However, I prefer ethernet. For Joulescope production, I use a local network with fixed IP addresses, which you can think of as “USB-ish” in that the network is a computer talking to the test equipment.

Beware ground loops if using USB, they can introduce a lot of noise unless you use an isolated interface.

I use the python-vxi11 library

Thanks - as a non-wizard level python person, are there any easy ways to connect that to a gui? Or have I missed the point and there’s already a gui built-in (as opposed to grabbing screenshots via a command)?

you could just run a LAN cable to your computer directly.

which you can think of as “USB-ish”

It is - good enough for me.

Thanks, will do. My measurement technique does leave something to be desired (Exhibit 1: VisaDSO screenshot above

Thanks - as a non-wizard level python person, are there any easy ways to connect that to a gui? Or have I missed the point and there’s already a gui built-in (as opposed to grabbing screenshots via a command)?

Yeah, no GUI that I know of. I find that by the time I am automating testing using bench equipment from my computer, I don’t really need/want a GUI, at least to perform and analyze the test.

I created pytation for my manufacturing test stations, but that doesn’t help for what you want…

I will certainly be considering the network UI a bit more carefully when I upgrade.

DSRemote is based on QT but unfortunately there’s a firm “no” by the developer to help with cross-platform compilation, such as replacing the Linux USB header file kind of dependencies.

I use the Mac version of this program (which is written in Xojo) for my DSA815 spectrum analyzers; haven’t tried it with a scope:

Not a lot of bells and whistles, but if all you want to do is screen caps with automatic copy to the clipboard, it’s fine. It can do USB or ethernet.

VirtualBox + DSRemote is winning so far… 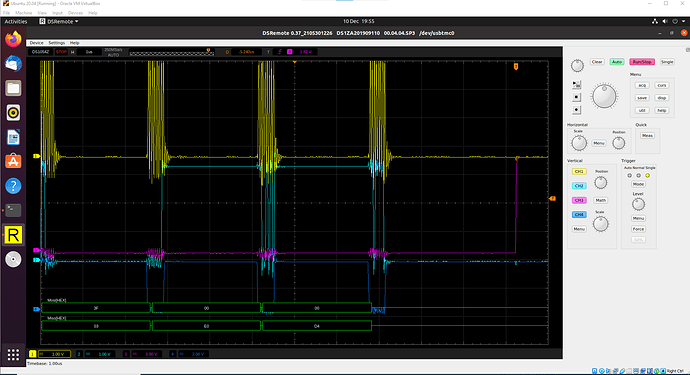 Not a lot of bells and whistles, but if all you want to do is screen caps with automatic copy to the clipboard, it’s fin

Another nice feature for some people about this suggestion @JuliaTruchsess is that the application doesn’t require installation and looks pretty lightweight. Certainly better than the several hundred MB the rigol solutions require (plus all the NI VISA tendrils in your OS - I wouldn’t mind if every manufacturer’s app worked with any version of the VISA stuff but my experience is that they are quite fragile about VISA versions).

I should also say that I tried to get Pulseview up and running. I hit two issues, one of which was the showstopper for this option (at this stage, when DSRemote is up and running).

The first issue I had was with the nightly I downloaded it would only run in safe mode. Which sounds like it could be worked out with older versions etc. But the problem for me was the need to change the USB driver from USBTMC to the LibUSB or WinUSB driver in Zadig. Although the drivers are assigned by port, so I could use different USB ports for different drivers on the scope, I decided to quickly check how easy it is to remove a Zadig-assigned driver from a device. I did not like what I found, with some people ending up unable to use their devices in vendor software after “trying” eg Pulseview and Zadig-assigned drivers.

The lack of clear ‘use this driver with this scope if you want to use Pulseview’ meant my confidence of being right first time is pretty low.

Of course, when I get the ethernet cable out and connect the scope to the PC, I may try to connect that way, just to see if Pulseview offers anything over the DSRemote and VM combo I’ve settled on for now.

I settled on EEZ Studio for my entire lab.

Now that is cool,

I will take a look.