Hello to the Contextual Electronics Community. My name is Nathan and I graduated with a degree in Electrical Engineering in 2018 with about 2 years of cumulative experience in a coop in industrial controls. My current job involves third party repair for medical imaging equipment. This includes developing repair procedures, reverse engineering the equipment and developing test equipment.

I have recently been evaluating where I want to take my career and found that I really love electronics design especially in embedded systems. I found Contextual Electronics listening to the Amp Hour podcast and decided to sign up in order to build the design side of my skills since my undergraduate classes and work experience has mostly been with base theory and circuit analysis. Eventually I would like to focus more on hardware development whether at my current employer or, if not possible there, at a future job.

For projects I am working on an interface controller for a coffee roaster that I use regularly that will allow me to attach additional thermocouples, and interact with the roaster via a web browser/USB to run pre-configured roast profiles and monitor the status of the roast more completely.

Over the last week or so I completed both the Shine on You Crazy Kicad and Getting to Blinky courses. I didn’t order the boards and assemble at this point because I was mostly using these to get a feel for how Contextual Electronics courses work and how to use Kicad. I have done PCB design a little bit before but I was using my current boss’s preferred ancient copy of CIRCAD '98.

I did take a shot at laying out both of these boards before watching the corresponding videos all the way through. I definitely need to get a bit more experience laying out PCBs. I wasn’t thinking through the design as a whole enough which lead to a lot of time spent deleting traces and moving the components until I was happy with the final result. I also suffer from a desire to want any PCBs I design to be somewhat aesthetically pleasing which was the cause of much of my re-dos. On that front though the 3D viewer is awesome. Below are the results. 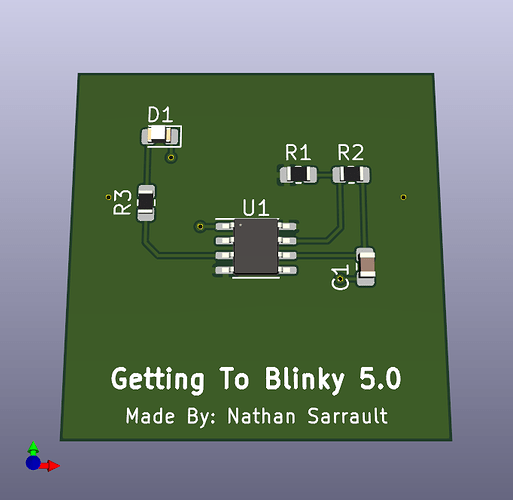 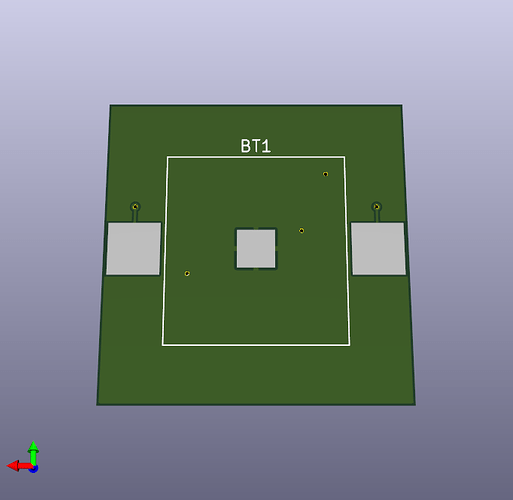 From here I am planning on working through the Current Sink or Swim course. I’m interested in the analog side of electronics which this course seems to touch on a little bit. I also can think of at least a couple times where a current sink like this would have been useful in previous projects.

Nice to see @Naxian, we are in a simillar path here at CE. I had some hard time to understand the flow of CSOS project, probably, because Blinky and Shine are very organized and straight forward to follow…
Then, I opted out to follow along with Full Charge Ahead project, it is not listed on the courses section, but i found it on “My Progress” section… Also, take a look on it.

The Full Charge Ahead project is in the process of being migrated over from our legacy site, that’s why it’s not listed. There won’t be any associated forum posts with it yet, so I recommend waiting for that to be listed before moving to it.

Great job on the board, @Naxian!

Thank you for the input! @Gustavo, I will admit that it has taken a little bit to get the hang of the difference between CSOS and Getting to Blinky or Shine On. It has required me to take a bit more time to work through each of the videos and make sure that I followed on.

I will have to take a look at the Full Charge Ahead project once it has been fully migrated.

Current Progress: I’ve now worked through the point of finding the Op Amp and the LDO for CSOS.
The biggest challenge in this part of the project was that it looks like the project may be a couple of years old and the parts.io website has now become findchips.com which has a bit of different interface. This made it a bit hard to follow along. At this point I have gone through the process of searching for these two parts 3-4 times trying to get a handle on the methodology behind choosing a part.

Overview of the Project: I struggled a little bit in the first couple of videos to get a handle on what the end goal of the project was. The videos seemed to be referencing it as a part of a larger project. Once I got a handle on the fact that we were attempting to test battery cells it started making more sense and reviewing the Reload schematic definitely helped too.

I’m still a little confused as to what parameters we are testing on the batteries. Is it to determine run time, the voltage drop-off, or current capacity of the batteries?

Picking the Parts: The first time I did this was after the intro video and I used only the Digikey search tools. My biggest problem here was that I wasn’t sure what type of batteries or what configurations. I arbitrarily picked an 18650 cell setting the safe discharge voltage at 3.2V (The minimum discharge voltage was actually 3.0V but I left some safety factor because I don’t know much about lithium batteries). With this I landed on a TI TPS79330 voltage regulator and an MCP6241 Op-Amp. These would have worked fine with the 3.0V supply voltage but that would have made it hard to test most batteries.

After watching the video I ended up finding the findchips.com website and after jumping around through the video a few more times picked out what some of the key parameters were. Findchips works well but is a bit tricky to get results out of. You have to be careful what filters you use because some of them aren’t populated for every part and you can cut out a lot of potential choices by choosing one of these. Once I figured that out I got much better results.

For the LDO I ended up choosing a MIC5205 with a 2.5V fixed output. At this current it has a max dropout voltage of only 50mV. It also had a wide input range and potential to supply up to 150mA output current so if I order a few extras they will likely be usable in future projects.

For the Op-Amp I ended up going with the MCP6002. Which I realized later was the same one from the Reload project. It was widely available, capable of operating with a 2.5V supply. Part of this pick for me was again to choose something that I could order some extras of to use in future projects as well.

Next up choosing the rest of the components!

I worked through most of the CE projects last year, and had some of the same issues that you’re reporting. I ended up mostly just searching for parts on Mouser, which is less convenient for parametric searches than something like parts.io, but it works if you’re patient.

My build log is here: Ian's Build Log and there’s a more detailed write-up of what I ended up doing for the CSOS project here: https://skybluetrades.net/projects/teensy-load/ – I don’t know if that will be any use to you, but I’m happy to answer questions about the experience (if I can remember what I did!).