Ahoy and good Monday to you all!

A Great Scott video (Electronic Basics #23: Transistor (MOSFET) as a Switch - YouTube) came up in my feed and I took a look over lunch today and the section at 2:24 caught my eye - he was able to turn on the n-channel MOSFET via electrostatic discharge, adding a 10K pull-down on the gate solves this issue.

There is a similar video here by Dustin Watts (MOSFET Why use a Gate and a Pull-Down Resistor? - YouTube). There seems to be two differences though

The solution to both cases is to add a 10k pull-down to the gate.

I have been unable to reconcile the two effects shown in the videos. I intuitively get Dustin’s video - he is able to get enough charge into the gate to open the channel and as there is no path for the gate capacitance to discharge it remains open.

In Great Scott i can appreciate the ES discharge is able to activate the gate, though I would expect the ESD to destroy the insulation on the gate (but it didn’t for some reason) - and with no discharge path, I’d expect the MOSFET to stay on

The pull down as a way to ensure with no input the MOSFET is off is fine, not sure how it’s solving the ES issue in Great Scott though

I’m in the Australian outback, and ambient relative humidity can fall to around 5%, so electrostatic discharge or electrostatic fields are something I experience regularly.

Electrostatic discharge does not always cause damage or misbehaviour. That’s one of the frustrating aspects of managing it. It can be hard to reproduce the source of a chain of faults.

The other frustrating aspect is that the damage can occur yet function of the device continue for some months, enough to make it dead on arrival or fail during early or regulated warranty period. This has yield impacts on manufacturing, though it occurs as returns or contract issues.

Consider the dynamic system. With a pull-down, in both cases the voltage rise from the input is substantially reduced, and so the gate does not reach the level of activation, or does not remain activated. A pull-up resistor will also function to prevent an otherwise open gate from being dragged to ground by an accidental input, provided the designer expects the gate to be driven low instead of driven high by the circuit.

The key message to me is that gates should always be driven somewhere, either by a totem-pole output earlier in the circuit, or a switching element and a pull-up/down resistor.

I’m in the Australian outback, and ambient relative humidity can fall to around 5%, so electrostatic discharge or electrostatic fields are something I experience regularly.

Electrostatic discharge does not always cause damage or misbehaviour. That’s one of the frustrating aspects of managing it. It can be hard to reproduce the source of a chain of faults.

Consider the dynamic system. With a pull-down, in both cases the voltage rise from the input is substantially reduced, and so the gate does not reach the level of activation, or does not remain activated. 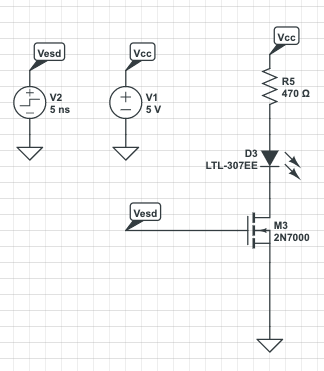 now, in reality and practicality, what we want is for the MOSFET gate to be at a known value until we want to change it - for example: 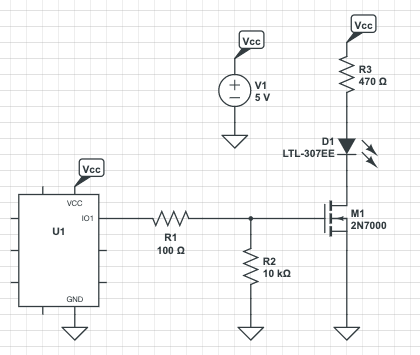 thus the pull down is serving two purposes

in terms of ESD or other coupled noise, there are better ways if these are of concern; a shunt capacitor, TVS etc. The take away from the videos should be that it is incredibly easy for stray voltages to influence a MOSFET gate if left floating (ESD is one way that this could happen, but coupled noise from other traces, RF/EMI noise etc are others - ESD would have it’s own problems in a worst case scenario of course)… but basically don’t leave a MOSFET gate floating

Well, yes, but it depends on what you want as circuit designer. Some touch sensors rely on this property. A sufficiently large value pull-down, such as 10 megohm, may be used, along with protective diodes to supply and ground. Body diodes on microcontrollers. RF can certainly be an interesting trigger; if the gate is in proximity to a low powered transmitter, or within cooee of a high powered (amateur) transmitter.

Perhaps Great Scott had a HackRF One transmitting nearby, or a bluetooth mouse, or anything. Just can’t know.

1) sorry! damn fonts! 2) I am rather fond of abusing SED in this way myself! must be an aussie thing… or a life time spent as a sys admin…

but then, if I understand you correctly you don’t see anything wrong with my reasoning or understanding of MOSFET circuits and design principles - the basics seem ok (I know enough to be dangerous at least!); but yes, some application specific cases (that I am yet to come across) would require some more in depth re-neducation. Honestly when I saw those videos I questioned how well I understood the topic, which is when i stop and spend days reading!

I don’t see anything wrong with your description of the videos or your later reasoning and understanding about MOSFETs. No significant conflict. There are uses for electrostatic fields though, so it isn’t quite right for me to say “always pull-up or pull-down”.

no indeed, and that is an error on my side; the context of this is really, MOSFETs as switches

and as i’ve learned the hard way, in electronics (and many fields) there are no absolutes - at best these are rules of thumb; as you say, with a push-pull/totem-pole output you can get away without it. or the old favourite practice of decoupling vs muntzing

(it’s fine until it doesn’t work!)

in Great Scott’s video, he repeatedly touches the gate activating the MOSFET multiple times; when he removes his finger the MOSFET switches off (with no pull down), which I find a little surprising - the MOSFET gate must be charging when he touches the gate, and discharging (somehow) when he removes his finger. I am thinking he must be coupling in some energy that is not just ES (like walking on a carpet), rather he is coupling in some other lower voltage source as it is continuously present and not high enough to be harmful.

Is it really ESD? Ambient AC coupled to his body? It only takes a few V of AC to turn the gate on/off - without a scope trace, we don’t really know what the on state looked like. The “tell” on this, I think, is that if you watch the video at 1/8 speed, the LED sometimes turn on, sometimes turn off as he touches and releases the gate, but when his finger is on the gate, the LED appears to be about half as bright as the static on state when the gate is at some voltage.

Also, unless his body and the circuit shares the same ground, the FET circuit is floating (-ish). So being at “2000V” doesn’t necessarily mean the FET sees that 2000V. Ask any bird sitting on a powerline…

@ToyBuilder thanks! the fact that you thought to (and bothered to) slow the video down to 1/8 is dedication to the cause!

I have looked at it myself now at 0.25x and I see what you mean. there are occasions where he is clearly touching the gate, but nothing happens. Cases where, as you say, he touches the gate and it’s half power before he releases his finger and it’s full power - before touching it again and it drops to half power and oscillating like that as he touches/removes. It actually looks remarkably like Dustin’s video. Now of course there are cuts and edits here. But actually at 0.25x its not as strange as I thought.

You make a good point on different grounds as well.

But I can agree, that in the video, it’s very hard to tell exactly what is going on, but I will then say, I don’t like the blanket “even electrostatic voltages of my body can turn on the loads” 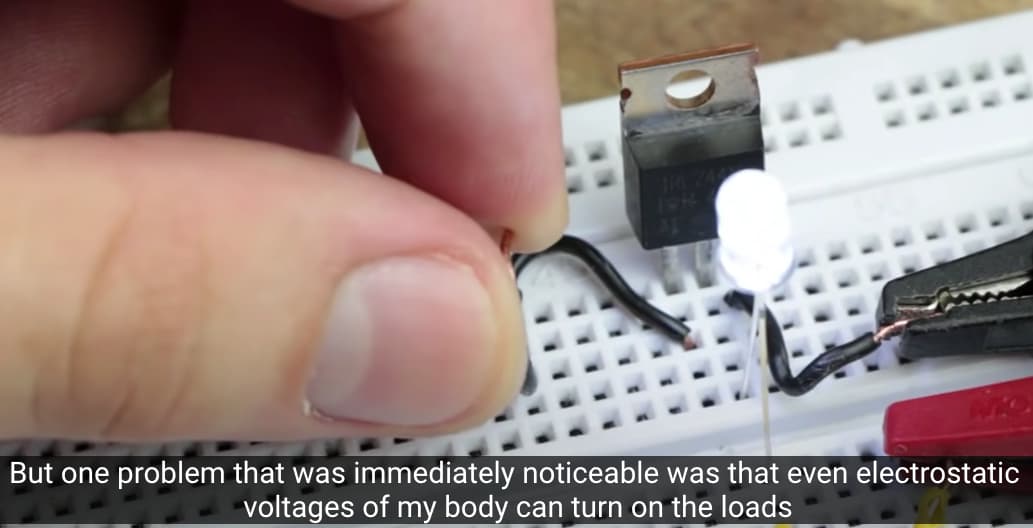 I feel that statement is ripe for misunderstanding. A better wording might be preferable as his point is basically, don’t leave the gate floating, anything could happen and it doesn’t take much to cause unintended effects. In any case, I’m fairly happy to have consolidated my understanding on the topic

Ask any bird sitting on a powerline…

An aside, this reminds me of my uncle who was a system controller at one of the two inbound grid substations in Sydney, where the long distance transmission lines arrive from power stations to be transformed to lower voltages.

When taking lunch, watching the pelicans, they’d happily sit on the bus bars, clear of the ground and the pests thereon, but they soon learned not to peck each other from separate phases. They learned to line up along one phase at a time.

They learned to line up along one phase at a time.

- I had heard about cows having unfortunate incidents due to SWER, but hadn’t considered birds on different phases interacting!