Hey, I am looking for someone to help integrate the KiCad plugin InteractiveHtmlBom (or functionality like it) into kitspace.org. Kitspace is an open source project but I am willing to invest some money towards developing this feature.

I discussed it with qu1ck, the creator of InteractiveHtmlBom, and they are ok with it, they seem to like the idea but don’t have any time to put towards it. qu1ck had some thoughts on it (technical/architecture ones, some of which I disagree with but the best approach remains to be seen).

There is also a guide on custom styling. Which could be useful since we’d like to make it fit in with the Kitspace styling.

It’s a bit of an open brief, we haven’t settled on an exact solution. Even if the end solution turns out not to use the plugin itself any more, I’d be fine with it (but it’s best not to re-invent the wheel and IHB is doing a great job).

Kitspace itself uses a sort of continuous integration (CI) architecture: we are basically acting like a CI that’s building a page for every project. We actually use Travis CI to build the entire site. It would be a matter of hooking into that build system, like we do for plotting KiCad PCBs.

Making the back-end for this work is more important than any front-end design skills here. I am happy to do the user interface side and we can try and get an actual designer to look at it too.

If you have questions/suggestions or would be interested to work on this please reply below or send me a private message. We also have a public chat.

Hi ghanem, in essence that looks right. But even though Kitspace uses React, converting ibom into React may not be the best way as as ibom developers already made the user interface work really well for people.

I love kitspace.org and I love InteractiveHtmlBom, so I’m watching this thread with interest. Lacking in spare time though, unfortunately.

Just merged in @ian-ross’s excellent work on this. See the announcement on kicad.info: 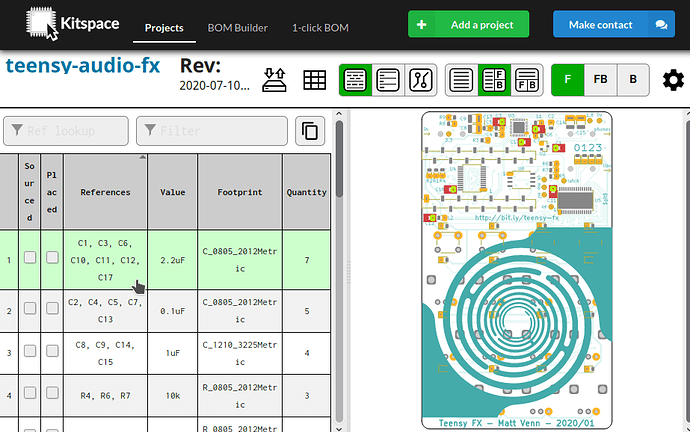 Automatic Interactive HTML BOM for all projects on Kitspace.org

Hey everyone, We’ve just merged a feature into kitspace.org that means every KiCad project now automatically get an assembly guide through @qu1ck’s fantastic Interactive HTML BOM. Kitspace users don’t have to do any setup or additional steps, they...

If anyone has some time and is interested in paid or volunteer work for Kitspace, let me know. Me and @ghanem are now trying to implement a group-buying PCB feature as part of a YC Sprint. If you think your project is a good candidate for low-volume PCB only group-buy, let me know too.