Has anyone had any experience with using light pipes to pipe out LED light from the LEDs on your PCB to the exterior of your enclosure? From what I understand, it is kind of an art. Any tips?

Here is a sampling of solutions: https://vcclite.com/product-category/lightpipes/ 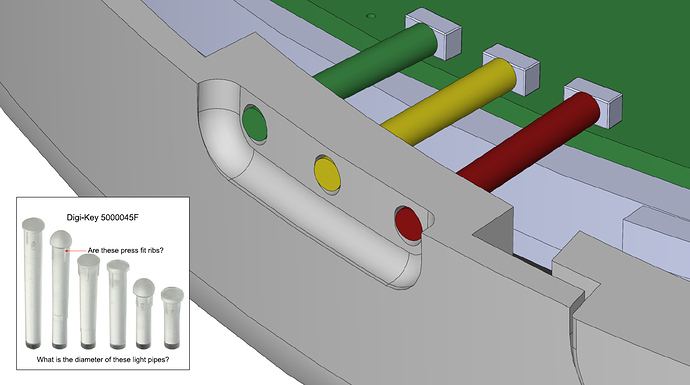 I got scared off by the official parts but just using diagonal cutters on 1/8" acrylic rod worked well enough for the T2 tiles.

I’ve only used light pipes one time (and am planning on using them a second time soon) and the kind I used was pretty simple. It worked well for what I wanted it to do which was bring light above some potting that was put over the entire board.

I’ve used the ones from Bivar and will be using this one specifically on my next project: Link
But they have a large number of them, including right angle ones. I mention it since this one mounts over the LED and has pins to keep it in place, some form of glue will be needed to keep it in place most likely. This might be easier for aligning the light pipe to the LED, but then you need to worry about the pipe’s location in relation to the enclosure.

For the ones you listed in the picture, they are press fit. That kit looks like it comes with a good variety of lengths and the three different heads on the pipe. Looks like there should be some that fit what you are looking for though.

I should add, what are you looking for? An off the shelf solution or a more custom one like Julia mentions below? 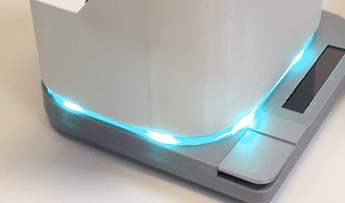 For production you’d want to use someone with specific experience.

I’ve use the PLP2 series (which looks like the original photo). They always feel expensive, but my usage it’s normally not totally killer.

You just drill the size hole they spec & the press-fit in. Works with both aluminum & plastic enclosures: 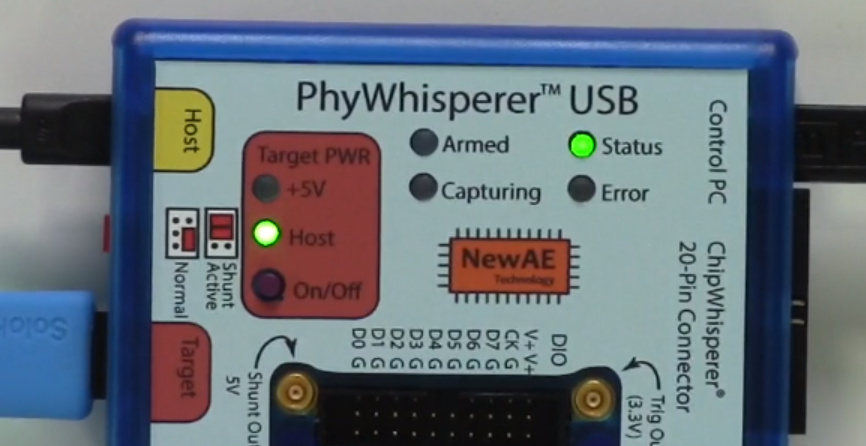 If you’re not too careful on the hole size or worried about them popping out, you can put a bit of epoxy on the backside with a syringe. We do that anyway as I’m always worried they will somehow, I think it’s pretty unlikely in practice.

The only real caveat with them is to watch for leakage/misalignment. If you pack them closely together & use LEDs with a wide field of view angles, the light will leak into adjacent pipes. Ideally get LEDs with vary narrow field of view. You also want the end of the pipe to be as close as possible to the LED surface. You never get “right there” so I normally end up with 1-3mm space (3mm is probably a little too much). You can swap the LEDs for ones with a lens on them to close up the gap if needed.

For what its worth, I used the Dialight 51513020125F (datasheet) on Joulescope. It’s good enough. For one LED, its relatively easy. Drill a hole the right size and try different light pipes to get the right look. As @coflynn says, you do have to worry about light leakage with multiple LEDs.

Depending upon how picky you are, light pipe design can be complicated. You can end up with “hot-spots”. Creating even light from all angles across the whole light pipe surface often requires more diffusion or bouncing the light. From past product experience with the Hillcrest Loop where the acrylic part had to light up just right, getting the exact illumination and diffusion requires design and experimentation. We had a great MechE do a bunch of experiments.

If your main goal is to get distinct channels of light out to the enclosure exterior, but you are not super picky, then any piece of plastic would do much better than not having the light pipe. The key thing to remember is the critical angle of the light reflecting in the material – you want to maximize the internal reflections in the plastic to get the light that you shoot into the entry aperture to go out the exit aperture. By managing that carefully, you can make single piece light pipes with multiple light channels and can combine variety of shapes/placements/sizes AND also have features that make it easy to mount the light pipe into your design (whether on the PCB or on the enclosure).

I have used clear 3D printing filament with the ends polished as a stand-in and it works ok.

“Clear” resin prints from 3D printers can be good enough, at least for prototype. Disney was already working on that a decade ago https://newatlas.com/disney-research-3d-printed-optics/24435/

For low-volume or low-labor cost production, you might consider the classic LEDs with spacers. 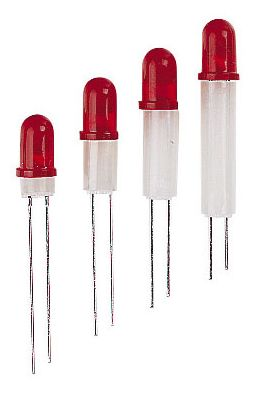 Hey @Dave, welcome! New members are restricted from posting images and links immediately, as a spam prevention technique. A bit annoying, but you should be able to post those things after a bit of browsing/reading other threads. We hope you stick around!

As for light pipes, I have used this off-the-shelf model in the past:

Like any spec part like this, you’ll end up needing to design mechanical elements around the part, which carries inherent risks in the supply chain (whaaaat? In 2021??). However, having it in the design with a custom footprint fit the “just works” criteria that is always satisfying in a project. The link above is for a vertical part, so it won’t fit your project, but there might be similar parts available.

I remember back in college in the early 1980s, I encountered light “pipes” twice – both times in cars. The first was my old Datsun B210, and a couple of the dashboard switches were illuminated by a light pipe. The light bulb for the indicator was deeper inside the dash somewhere, and it was routed to the switch in some kind of fiber pipe. This was like a 1976 car, so I don’t think it was using fiber optics as we know it today.

Another car was a Cadillac that a friend borrowed from a family member for a week or two. Along the roof line on the driver’s side, just above the windshield, was a row of what looked like LED indicators. But they were not LEDs, of course. They were light pipes which snaked through the car to each of the four corners and monitored the parking, hazard, brake, turn signals, and reverse lights. If you had a blown bulb, you’d know it before being pulled over by a policeman.

This doesn’t answer your question at all, but maybe it will inspire an out-of-the-box solution.

I’ve had some experience with light pipes a long time ago (and I won’t bother repeating what many other people have already said).

From what I understand, it is kind of an art.

What I can say is that, you’re right, they are a bit of an art to design right. Don’t underestimate the leakage between the light pipes, and double/triple check your order of operations for assembly.

Also, if you have three LEDs in a row like that, you might want to consider a single piece light pipe that has three channels. It’s more likely that the leakage was taken into consideration, and it might make assembly easier.

I have used clear 3D printing filament with the ends polished as a stand-in and it works ok.

I used this to bring an onboard LED on a dev board out of a 3D printed enclosure and was very happy with the result. Assembly was a pain. Regardless, it’s a great prototyping option.