I have fixed up that plugin a touch this week, so might be working now. Please open an issue on the github repo if you can’t get it working.
Speaking of KiBuzzard I’ve just got it included in the KiCad Plugin/Content Manager, so you can install it directly.

I’ve been on nightly so long that libraries have already been on the new system. v6 will work with all your existing libraries. I think the main issue is when you want to add a new symbol to a library, then you’ll need to “update it”, which is just a matter of saving it. But at this point the library now wont work with v5.

Saw it as I ordered several plugins from the highly convenient plugin manager, so fingers crossed! Not tried it yet but there are definitely projects I will be porting to 6.0 just to relabel them if it works

having to select an item to copy in the Schematic Editor

Copying items by just hovering and pressing C was one of the best time-saving UI features of KiCad. Not that I don’t want select-and-copy also, but I don’t see why they couldn’t co-exist, as they have for a long time

Fear not, hover actions still work. Ctrl-D will duplicate the item without selecting it, and you should be able to set the shortcut to C if you prefer.

I’m interested to hear what people’s thoughts are on library migration and maintenance during the testing/evaluation phase. Do you think the hassle of maintaining two versions’ worth of footprints and symbols will catalyse your shift to V6?

This is a part which I think may take a little bit of time and thought. I don’t think I will maintain two sets though, all new/updated designs will use V6 parts etc (with updates if needed). Two particular thoughts have come to mind from my initial use;

One of the new things I love so far about KiCad 6.0.1 (please upgrade if you haven’t from 6.0) is the ability to control the hierarchy page numbers. I used to have to hand-edit my schematic files in a text editor to get annotation numbering to look logical before and it would often still get messed up after an edit. Now you can change the page number when you edit the properties of a hierarchical sheet and produce OCD-salving page numbering like this:

Ha, and I only just figured out recently how to re-order hierachical sheets in v5 - delete the sheet symbol, then un-do the deletion and it reappears at the bottom of the list

Also, there is now Ctrl-C on hover, where it copies the element and selects it (or highlights it) to indicate something has happened, then if you hit Ctrl-V it appears under your mouse and you can move it until you click somewhere to paste it there.

I guess we have more options now.

One of the new things I love so far about KiCad 6.0.1 (please upgrade if you haven’t from 6.0) is the ability to control the hierarchy page numbers

Yes! So many little things like this that have fixed slightly irritating limitations. It feels a lot more grown up now. The page numbering is in v6.0.0 though, I think v6.0.1 is just bug fixes.

One of my other favourites is keepout areas now allowed in footprints. Really useful for Antenna keepouts.

I was about to say “but unfortunately it won’t yet let you do circular keepouts which are needed for bottom component wavesoldering keepouts around TH pins”. Though I just found that combining with another new feature - create keepout from selection - you can actually do that now too (though it’s a polygon with loads of points rather than a native circle). 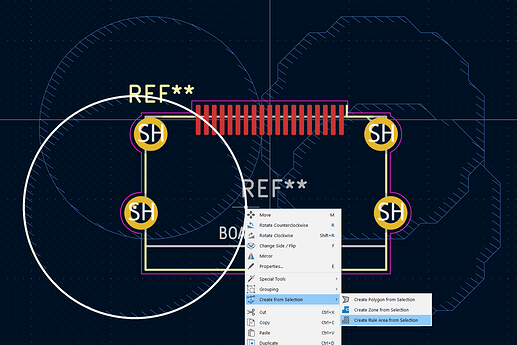 Alas, not the case. As far as I can tell, C cannot be made to copy without a modifier as it did in v5. So far I’m really hating what’s been done to the schematic editor in v6. Instead of fixing stuff that’s needed fixing forever (like dialogs where escape and enter don’t work, for instance) they chose to take all the things that annoyed me about PCBNew in v5 and put them into the schematic editor. There is SO much more keyboarding now - constantly having to contort my hand to hit the cmd key to duplicate stuff, constantly having to hit M for move instead of just grabbing stuff and moving it as you could in v5, constantly having to hit escape to de-select, and constantly having to undo when I forget that things don’t automatically deselect after having been moved, as they did in v5. A complete buzz kill and drag on productivity.

The new icons are drab, indistinct, and less informative. V5’s “disk save” icon at the upper left was great - you could always verify with a quick glance whether you have unsaved changes or not. The new icon is a floppy disk

and gives no indication of saved status.

Hopefully the layout editor will have some actual improvements, I do need the new DRC for high-voltage work but may well end up staying with v5 for everything else.

What platform are you on? C, V, and D are working as copy, paste, and duplicate for me (with no modifier). Also, you should in theory be able to import your hotkeys from 5.1. Preferences->Hotkeys->Import Hotkeys. I think 5.1’s hotkeys are at ‘/home/mike/.config/kicad/Eeschema.hotkeys’ for me. This should have paths for other OSs https://docs.kicad.org/6.0/en/kicad/kicad.html.

Mouse drag should be settable in preferences: 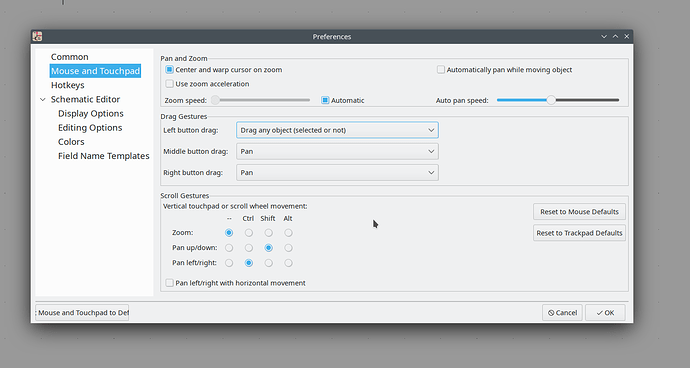 No idea about the save icon. The title bar of any unsaved schematic/PCB will start with a * if it’s unsaved though.

Please file bugs for any dialogs that aren’t working with the Enter/Escape key. If you click, Help->Report Bug in whatever tool you’re using, it will automatically take you to the bug report page and fill in all the annoying version info required.

I was setting the hot key for the Schematic Editor; when I set Duplicate to “c” in the “Common” section it works, yay.

Thanks for the tip about unsaved status, I still prefer the green arrow of V5.

Thanks also for the tip about bug reporting - I ran into a really nasty one that caused an immediate app quit when moving sheet boxes around that I will try to find time to report. Basically I had two sheets, call them A and B. B was originally to the right of A and there were connections between their hierarchical pins. Then I decided B should go to the left of A. I deleted the connections between them and moved B over to the left. Thereafter, creation of any new sheet between A and B, or moving another sheet between A and B, caused an immediate app quit. I solved the problem by deleting B and re-creating it. MacOS Mojave, which is officially unsupported.

There is a security advisory attached to the 6.0.2 release (four days old as-at time of posting), relating to gerber and excellon files (not KiCad files AFAICT). I believe this affects all versions of 5.x too, so if you want to keep using 5.x and open gerbers from other sources you may want to seek a patched version. I haven’t upgraded to 6.0.2 but will do this morning, as there are sure to be other improvements incorporated.

Does anyone know a good way to be notified when KiCad stable versions are released, other than regularly visiting the website? I was hoping to subscribe, rather than poll for this kind of info.

I have been tearing my hair out with custom footprint pad creation in 6.0.x. For anyone seeking to do the same, you will find the workflow different to 5.x and earlier.

Initially, I searched for “custom footprint creation kicad 6” which turned up almost nothing of relevance to version 6. I saw in the release notes that there was a WYSIWIG footprint editor now. With no further documentation hints or guides out there, I assumed that any copper overlapping with the anchor pad would be considered on the same net (WYSIWIG, after all). Hooray for being able to draw filled circles, polygons and rectangles in V6 in COPPER!

However, I just got to DRC and have 1300 errors due to copper clearance. It clearly wasn’t as WYSIWIG as I thought!

So, back to the search engine. Only hint I found was https://www.reddit.com/r/KiCad/comments/rrgvn6/v6_creating_pad_from_the_selected_shape/ which didn’t flag in my initial search because I was focussed on footprint, not pad

What worked for me:

Hope this helps you save some frustration. Feel free to copy/edit/paste into any other forums/locations you may think will benefit from the list above.

Hooray for being able to draw filled circles, polygons and rectangles in V6 in COPPER!
However, I just got to DRC and have 1300 errors due to copper clearance. It clearly wasn’t as WYSIWIG as I thought!

Another method you can use is to add “net tie” to the ‘keywords’ of a footprint. This tells KiCAD to ignore DRCs generated internal to the footprint (but still works to other footprints). This does remove some protections so could lead to shorts if you’re not careful, but if you know you already trust the footprint and want to stop the errors then this is a good solution in some situations - e.g. was recommended to me by one of the lead developers through https://www.kipro-pcb.com/ for MIFA PCB Antenna footprints.