Hi! Working on a board that requires large trace widths, as there could be up to 5.0A running through them. There are additional components for the power portion of the circuit that are smd 1206 sized. The trace width used is 120 mils. The copper is only 1 oz thick, and it’s an exposed copper clad board (hence the +11 mils extra, just in case). Calculated via this calculator.

When routing the large traces to the smd components, it causes the entire pad to be ‘covered’ by the trace. I was wondering what the best practice design is for these cases. What I tried was reducing to 60 mils. Could that cause issues? If there are any resources, tips or tricks out there, it would be really appreciated! Thanks 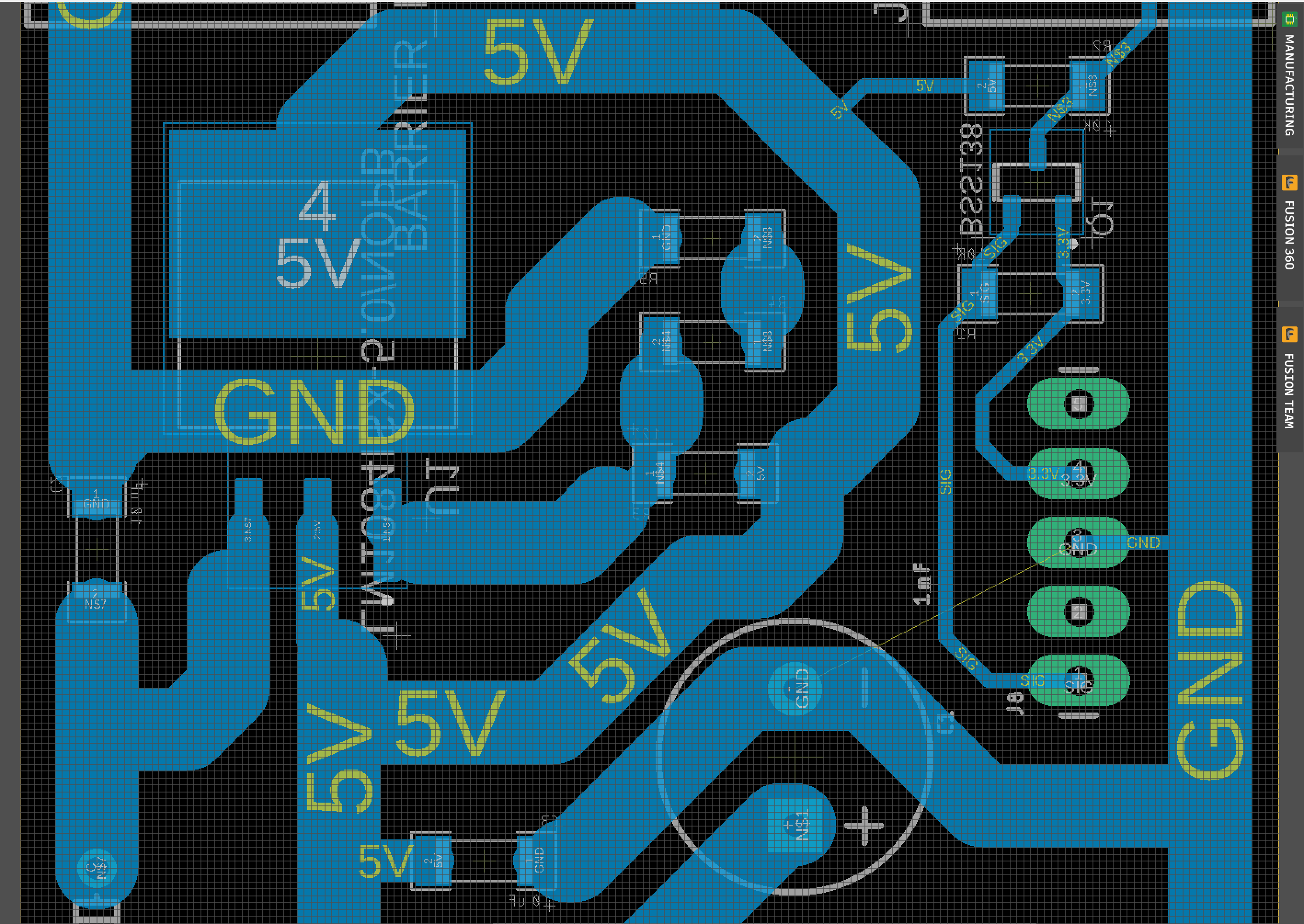 PS: As for the design choice regarding not choosing a copper pour, this is just my preference based on the fabrication method (milled copper clad) and previous experiences. If going with a board made at a fabrication factory, would indeed move +5V and Gnd each to their own plane as a copper pour.

Normally I’d never be concerned that an entire pad would be covered by a fat trace, because solder mask will do its thing and expose what should be exposed. I’m not very familiar with the milled-board process, though.

As far as reducing the width of portions of a run, just think of all the sections of varying widths as resistors in series. A long fat section can compensate to some extent for a short narrow section in terms of overall resistance, but narrow sections will get hotter for a given current.

Is there a particular reason you can’t use 2oz (or 4oz) copper? These add very little incremental cost when sourcing from China, but again I don’t know what’s available to your for your milled process.

I usually neck the trace down before it reaches the pad to make it look neat.

Something to consider is whether all the 5V/GND traces need to be so large. In the middle of your screenshot, it looks like there are three resistors in series making a divider. I would guess that is a feedback signal, which probably carries very little current. Those traces could be made much thinner and would allow you to move the resistors to give more space to the traces that need to be wide.

I would have thought that flood fills on a milled board would be better than traces as you don’t need to remove as much copper. It’s been a few years since I milled a PCB though…

The width of the copper trace will depend on the allowed temperature rise at the given current. You might aim for a few degrees C rise. You can use thinner traces if you’re happy to let the board get warmer (check the Tg of your board material, how long you want the board to survive etc).

I use the Saturn PCB Toolkit (https://saturnpcb.com/pcb_toolkit/) for calculating these things…

If you are necking down for a short duration to transition from a (comparatively smallish) pad to a much bigger trace, you probably are only necked down for only a small fraction of the total copper area – in most cases, any local heating in that area would flow into the adjacent larger copper, so you should be fine. In the case of that TO-263 (I think?), I’d want to splay the connections to fan out more and allow wider copper for 5V to get closer to the pad, but even that’s probably not an issue since you’re already reaching around to the tab on the other side to grab the same 5V.

I would probably not bother to have the neck down to the pads, especially on milled boards – just make sure place the copper slabs with enough clearance between the two terminals to ensure separation.

BTW, are you sure you’ve got that LM1084 wired right? Are you using two resistors to dial in the lower half of the voltage divider?

As mentioned by others, necking down the traces should be fine if only doing the last little bit of the trace.

One disadvantage to using the big traces directly to the components is that it makes it somewhat harder to hand solder. The big traces act as heat-sinks, making it harder to get the pin and pad up to the melting point of solder.

As for the design choice regarding not choosing a copper pour, this is just my preference based on the fabrication method (milled copper clad) and previous experiences.

I would ask about the avoidance of copper pours. If I’m interpreting this correctly, “milled copper clad” is taking the pre-made, double-sided solid sheet PCB, and having a CNC mill remove copper to create traces, right? If that’s the case, then going with copper pours might save you a ton of machine time, because there would be significantly less material to remove.

Could you elaborate on the previous experiences?

I usually use polygon pours to fan out power parts like this to thick traces. I find it to have better control than traces which insist of having radius edges.

Generally neck downs are tolerable because the thick traces on either side can dissipate the heat that is accumulated in the neck. Also the neck doesn’t introduce a lot of resistance because the length is very short. Play with a calculator like this and see what I mean: https://www.allaboutcircuits.com/tools/trace-resistance-calculator/

For example a 20mil long 8 mil trace has the same resistance as a 20mil thick trace that is 500mils long.

Further, if the neck accumulates a solder fillet, its resistance is even lower due to the extra conductor material.

Your layout is fin, I think that it could be even more tidy by filling in the regions that you have produced with traces by using polygons:

Excuse the bad drawing but you get the picture: 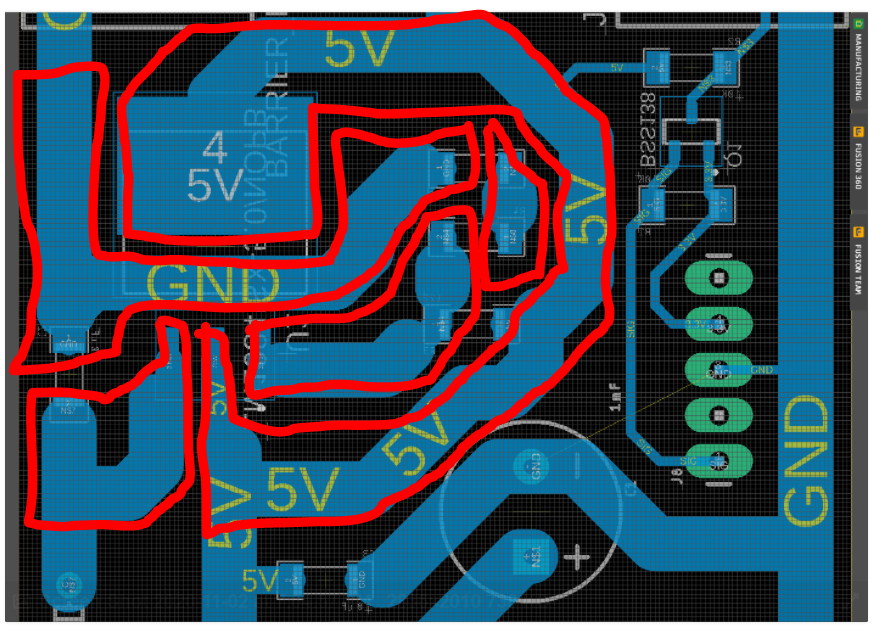 This is just an improvement, what you have is great too. The one thing with pours that I try to do is use 45 deg angles as much as possible, 90 is ok but acute angles (<45deg) can cause “acid traps”.

Your buried the lead on the fact that you are milling these. That’s a major factor.

There are also so many variables that you don’t discuss that it’s really hard to provide reasonable advice . What did you use for acceptable temp rise? What is your max operating temp?

If you neck the trace down enough to reliably manage solder wicking, you risk generating a fuse.

Since you are milling them - you could use small strips of kapton tape. You can buy really narrow Kapton - I’ve seen 1/32". Or make a soldermask stencil at the same time you make a solder paste stencil and squeegee epoxy solder mask on. This is simple enough where you might hand paint it. Sharpie might work, too. Dunno I assume you are reflowing this. It will be very difficult to solder by hand.

Besides all the other relevant advice (i.e., that a small neckdown won’t cause as bad localized heating as the formula suggests if it was on it’s own):

If you are milling the boards (no soldermask) - life is easy. Just coat high-power traces with solder and be done, don’t waste time getting fancy thicker copper boards etc. In fact I’ve seen the ‘add cross section to trace with solder’ technique used in real production boards too (some caveats here - see links with more details link one and link two.